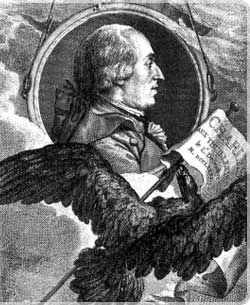 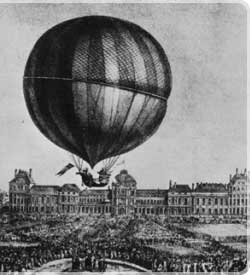 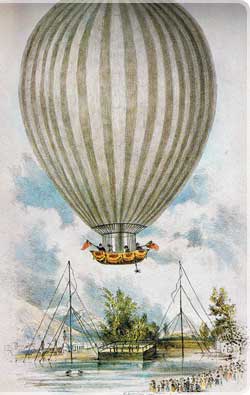 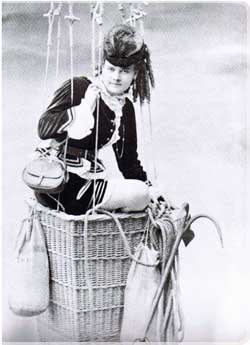 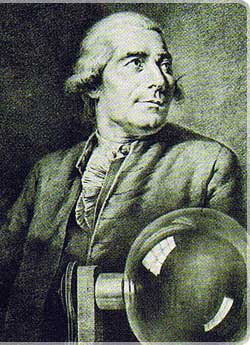 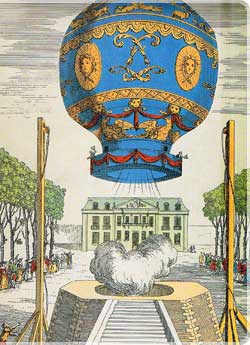 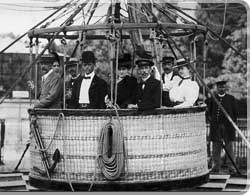 Man thought he could leave the ground by imitating the bird. He was on wrong. However much he stuck feathers on his body and shook his harms strongly, he couldn’t fly. He needed to find a way - like the invention of the wheel that had allowed him to go faster on earth - when no visible examples did exist in the nature. He needed a true invention: and this was the hot-air balloon. (Icarus dream).

The first experiments: birth of the hot-air balloon

Joseph Montgolfier was a french man, paper producer in Annonay. He was born in 1740 and had a true passion for the machinery progress, what was all the rage at the time. With Etienne, his younger brother, they had often dreamed of the human flight. They had even thought about capturing clouds in a certain king of envelope to which they would have hanged a basket.

Nevertheless, they could not find a way to make this idea real. But one day, when Joseph succeeded in inflating his shirt by holding it by the neck above a chimney fire, he realized what a stroke of genius he had had. He understood that, as hot air was lighter than cold air, he could use this principle to lift something heavy off the ground.

He immediately shared his discovery with Etienne and they started to imagine the shape they could use to construct a balloon for their first experiments. To start with, they chose a one cubic meter globe, sew made. They heat it above a fire and the globe took off to reach 30 meters.

Those events took place in November 1782. It can be considered as the birth of aerostatics.

In December, they continued their experiments with a 3 cubic metres balloon. Then in April 1783 they repeated the experiment with a 800 cubic metres balloon which rose 1200 feet high. Until then, they had worked secretly in their garden but with the increasing altitude of the flights, they feared that someone in the neighbourhood would become aware of what they were doing and could steal their idea. They decided to organize a public flight with their balloon in the centre of Annonay with a trustable assistance who would testify if need be that the Montgolfier were at the origin of the idea.

They made a 900 cubic metres envelope made of cotton sewed on paper. On June the 4th, they tied the balloon to the ground and to 2 masts and hang up a basket full of wool and straw to it. When a sufficient heat had been created to allow the balloon take-off, they cut the ropes and the balloon started flying in the sky to reach an altitude of 30.000 feet. When it get colder 10 minutes later, it landed in a field and started burning for the residual fire in the basket. Sadly, the farmers who were working in the field were frightened by this strange object coming from the sky and they did not move an inch to stop the fire. Consequently, the prototype was completely burnt.

Nevertheless, the testimonies of the flight certified his authenticity and the Montgolfier brothers could write to the French Academy of Science to be officially declared as being the first ever to have built a flying object.

The Academy invited them in Paris so that they could make a demonstration. Etienne went as a consequence to Paris. He met some physicians interested by his invention. One of them, namely Pilâtre de Rosier, would become the first flying man.

Meanwhile, an other scientist, Jacques Charles, with the help of the Robert brothers, built a balloon inflated with hydrogen, a gas lighter than the air. And he succeeded to make it fly in August.

Etienne decided to go further then: he wanted to be the first to realize a human flight. Pilâtre de Rosier propose to be the passenger of the flight but i twas considered as being to dangerous as the consequence of such altitude variation on a living organism were not known at that time.

Consequently, they decided to make the first manned flight with a duck, a cock and a sheep.

The flight took place on September the 19th in Versailles. King of France Louis XVI assisted to it. The three animals were put in a basket hanged to the envelope. After a three minutes flight, they were found alive; the sheep was eventually grazing peacefully.

Evidence had been made that living being –in addition of course to the birds- could fly without danger.

The only limit to human flights was King Louis XVI who had forbidden them to make such a flight, as he felt responsible for his subjects’ lives. After long negotiations, he accepted to give permission to it but refuse to be personally there.

The Montgolfier brothers did not fly themselves as they had promised their father never to fly in their balloon as he was not personally convinced of the security offered by their invention. Pilâtre de Rosier was chosen for the flight. An other passenger participated to the flight to balance the basket. The basket was divided into three parts: the two lateral parts were reserved for the passengers. The burner (a fire made of straw) was in the one of the centre of the basket. Additionally, the passengers could feed the fire with straw to control the balloon altitude.

The flight took place on 21st of November 1783, a date which would entered in History. In fact, it appears that Pilâtre had a very developed sense of piloting the balloon. He felt with a accuracy when the balloon had to be heated and when not when Sir d´Arlanes behaved in a much more passive way.

The result of this was they succeeded in flying above Paris during 28 minutes approximately. Their flight altitude reached 3.000 feet.

The Montgolfier brothers had won a great victory by achieving the first human flight ever.

After the achievement of this flight, hot-air ballooning rapidly became fashionable. The Montgolfier brothers were ennobled by Louis XVI.

The French population was enthusiastic about it but some negative people soon started to see in ballooning a source of new dangers: borders would disappear, particularly for thieves, private life could be violated and the military forces would use the balloon for reaching bad ends.

Meanwhile, the competition between Pilâtre and Charles –in fact between the Montgolfier brothers and Robert- was at his height. Charles achieved to fly higher and further than Pilâtre thanks to his hydrogen balloon. Then Joseph de Montgolfier constructed a 23,000 cubic metre balloon in Lyon, France. Yet, the flight he managed to do did not last long nor they reached a high altitude as too many people wanted to fly. The basket was consequently too heavy. Many people mocked him and his failure.

Yet he had done the easiest part: going from England to France and Pilâtre built a new balloon to do it in the opposite direction. More than a mere hot-air balloon, it was also equipped with a small helium balloon. Despite the advices of the Montgolfier brothers who considered this type of association too dangerous, Pilâtre took off from the French coast in January 1785. A few minutes later, the burner flame brushes the hydrogen balloon envelope which immediately lit up. The balloon started diving. And Pilâtre was flying too high to survive to the fall.

After having been the first man ever to fly he was the first victim of hot-air balloon flight.

Even if Pilâtre death did not put an end to hot-air balloon flight, it highlighted the risks of such balloons.

An other important inconvenience of hot-air balloons was that it was impossible to carry enough straw to get as far as with an hydrogen balloon.

Moreover, Airship soon replaced the balloons. Indeed they enabled to cross the ocean.

Hot-air balloons were almost totally abandoned until the second half of the XXth century.

At the beginning of the century, Louis Godard invented a petroleum burner. But it was not efficient enough to give a true use to hot-air balloons.

One had to wait until the 60ties to see the development of the modern Hot-air ballooning thanks to the invention of new materials and especially the use of propane burners. The American Ed Yost was the first man experimenting the new hot air balloon model, as it looks still today.

Since then, no big progress has been made in the shape of the balloon or in the technologies used, except the fabric and burner performance that have been improved.